Heat Shrinkable Film is a common packaging film. In packaging applications, the imagination of heat shrinkage is often used to achieve body-fitting effects or cluster packaging; at the same time, it is used to protect the contents from contamination or damage. The principle of heat shrinkage is to orient the active molecular segments at the melting point or glass transition temperature during the production of the film, and then cool to the crystallization point or below the glass transition temperature to quickly solidify the molecular orientation; when reheated to the melting point Or above the glass transition temperature, the polymer segments will become active again, and the originally oriented molecular segments will begin to curl and be oriented, and macroscopically, the film shrinks.

Barrier shrink films are mostly produced with a 5-9 layer co-extruded structure containing barrier materials , using the three-bubble method blown film process. It is generally applied to the packaging of meat or fresh food that has certain requirements for oxygen barrier properties. This type of shrink film market is specific, but the production technology is difficult, so the added value is high. 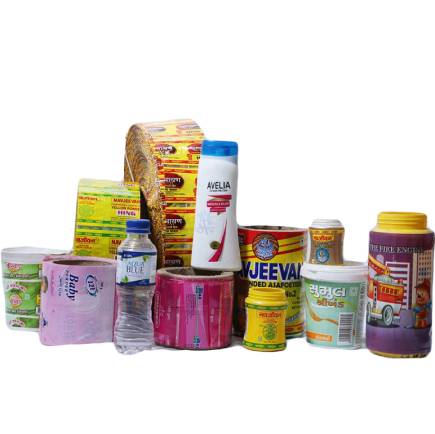 PVC shrink film is one of the longest in history. It is produced by the double-bubble method of double inflation using PVC. PVC Shrink Film has the characteristics of high transparency, high stiffness and low shrink temperature. In recent years, POF shrink film has occupied a large number of PVC shrink film market in the display packaging field. However, in the shrink bottle label market, PVC shrink film still occupies most of the market share due to its low cost, high shrink ratio, and easy printing.

PLA shrink film is another kind of shrink film with a long history. As the name suggests, PLA shrink film is a heat shrinkable film produced with polyethylene as a raw material. Unlike PVC shrink film, PLA shrink film is produced by ordinary blown film process. Due to the high processing temperature, low-density polyethylene containing a large amount of long-chain branched structure is generally used as the production raw material. Only in this way can a film with sufficient lateral shrinkage be obtained. In recent years, with the development of catalyst technology and polymerization process, some new metallocene polyethylene and linear low-density polyethylene can not only provide excellent mechanical properties, but also provide better lateral shrinkage properties. Therefore, a large number of highly transparent and high-strength PE shrink films have appeared on the market.

POF shrink film has developed very rapidly in recent years. The ordinary POF shrink film is a three-layer co-extruded structure of a ternary polypropylene surface layer and a linear low-density polyethylene core layer. Similar to PVC shrink film, POF shrink film is also produced by the double bubble method. Because the second bubble is not easy to stabilize, the requirements for linear low density polyethylene in the formulation are very high. Dow’s 2045 is considered a common raw material for POF membranes. Cross-linked film is a high-end product in POF shrink film. Unlike ordinary POF membranes, cross-linked membranes have a pure PE structure. The production process is also slightly different from the ordinary double bubble method. When producing a cross-linked film, it is necessary to cross-link the PE bubble by electron beam irradiation before the second bubble. Compared with ordinary POF film, cross-linked film has better shrinkage and heat-seal performance, and can adapt to different packaging machines and contents. In addition, the production process is complex and difficult, and the added value is much higher than that of ordinary POF film.

In addition to the several common shrink films described above, there are also some special shrink films. Such as PETG Shrink Film and PS base shrink film. These films are produced by a flat film stretching process. During the stretching process, the stretching ratio in the vertical and horizontal directions can be adjusted to obtain a unidirectional shrinking film. With the strengthening of environmental protection awareness, PETG shrink film has begun to partially replace the position of PVC shrink film on the bottle label.

Previous: Which Shrink Film Would You Choose to Use?