What are PVC, OPS, PETG and PLA?

All know how the heat shrinkable label was a very economical choice. The main materials used for the film of the sleeve are PVC, PETG, OPS and PLA. If these acronyms don't mean anything to you, I suggest having a look at the explanations below.

PVC (polyvinyl chloride). PVC is the second most used plastic on the planet, behind polyethylene. PVC film has good shrinking qualities (generally between 40 and 65%), as well as clear and precise rendering, in addition to being very transparent.

PETG (polyethylene terephthalate glycol). PETG is more expensive than PVC, but it's the most resistant film with the highest shrinking capability (up to 80%). It's characterized namely by its superior shine and excellent transparency.

OPS (oriented polystyrene). OPS is a low density film that's undergone a stretching process consisting in orienting the fibers in a certain direction, which is the direction in which the heat shrinking will occur. OPS is often used for containers that can be compressed easily.

PLA (polylactic acid). PLA has very good shrinking qualities yet has a more frosted look than other types of film. It's the most environmentally-friendly film for the moment, even if in practice there are some drawbacks. PLA can be composted as it's made from 100% plant material. Yet no one really composts this type of material on an industrial scale; not even our neighbours from the South. However, as the retraction process can be done at low temperatures, its uses less energy.

The various films each have their own specific components and characteristics. Choosing the right one requires a rigorous analysis of your project, maybe even depending on the environmental footprint that you want to leave. Fortunately, a simple consultation with our experts will allow you to choose the right film while considering your needs. 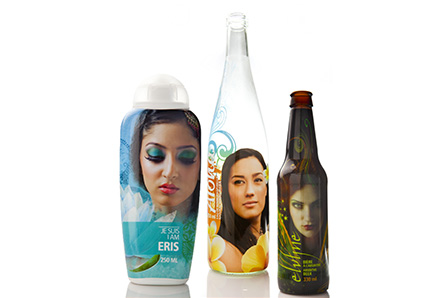